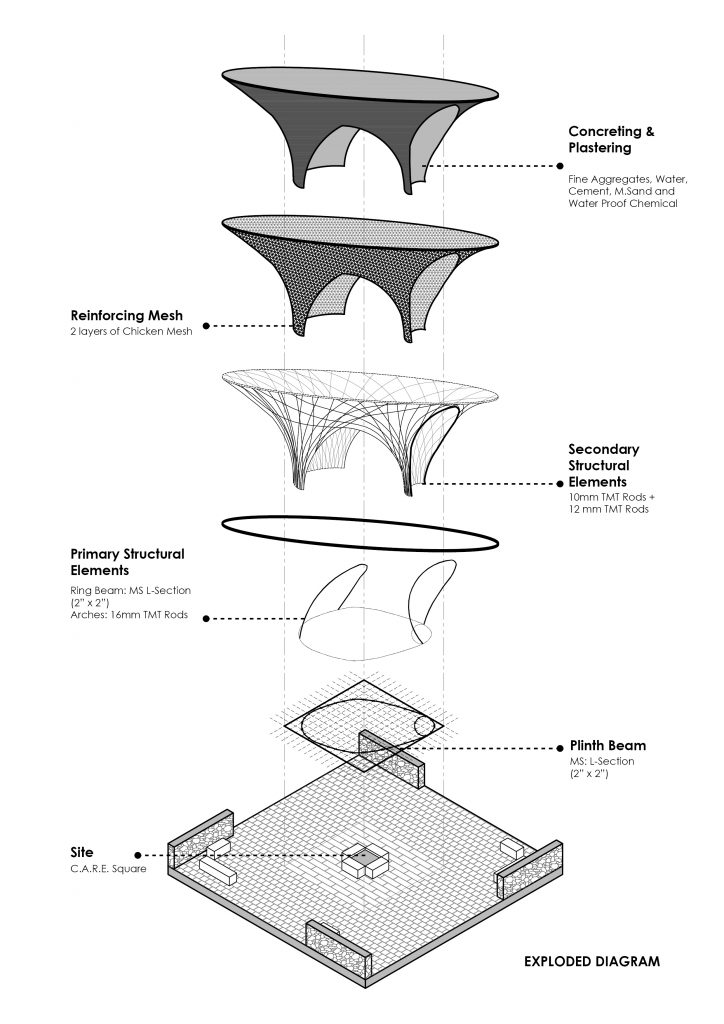 ‘O’Shell is an attempt to design and build a structure using an interactive approach towards form-finding and analog computation. Targeted at fostering an understanding of the relationship between form and force, in tension based curved surface structures, in an intuitive and playful way. ‘O’Shell investigated physical parameters as effective constraints in the process of design development. Further the process adopted to ensure a continuity between the stage of design development and the materialization of the final output with respect to the core exploration of an interactive approach towards form finding.

The Pioneering works of legends like Antonio Gaudi, Frei Otto, Isler, Nervi, Dieste and Candela were a major source of inspiration in the conceptualization of ‘O’Shell and the confidence to adopt an interactive and instinctive approach to the project.

‘O’Shell was an experimental project intended to be a hands-on, on-site exercise and as a response to its site conditions. The orientation of the structure, its base-grid, initial framework for form-finding  had all evolved based on site parameters. The design process including generative systems based on form-finding techniques were a direct outcome of design development that happened on site.

‘O’Shell utilizes the tensile property of steel to arrive at a Non-Standard/Non-linear process with On-site active bending as a design driver sans any formwork or shuttering either to hold the concrete or guide the geometry. The base framework was derived on site using site parameters as generators which was followed by  weaving and bending of steel on site based on our understanding of stress line methods to inform conceptual structural design.

Principal Stress Lines, which are pairs of Orthogonal curves that indicate trajectories of internal forces and therefore, idealized paths of material continuity, naturally encode the optimal topology for any structure for a given set of boundary conditions [Tam+Mueller 2015].

In general, for a ferrocement structure, a standard of 150mm spacing between reinforcements is to be maintained throughout. In this case, We have managed to go up-to 750mm in the top portion of the structure by simply utilizing the understanding of force lines. The intensity of reinforcement was predominantly on the lower side (leg) of the structure.

The beauty of “O”shell lies in its simplicity of execution devoid of any high-tech production systems but instead relies on the idea of human robots (hands of our students and unskilled labourers ). The Build was completed within 20 working days right from conceptualization of design, construction of the structure and to completion of the project.

‘O’Shell is a prototype of Procedural Design-II Module mentored by Balaji Rajasekaran (dMac Group) as part of the ‘Winter at C.A.R.E’ workshops, coordinated by C.A.R.E Design Cell, at C.A.R.E School of Architecture, Tiruchirapalli, India. ‘Winter at C.A.R.E’ is conceived to be the medium that seamlessly assimilates and immerses in such learning, beyond the confines of the classrooms and syllabus. It aims to help students develop an interdisciplinary and critical approach to the architectural discourse at the school. Further we believe that such cross pollination between the varied fields of Art, Science & Technology and Architecture provides for a rich and fertile environment that fosters ideation, innovation and allows for individual pursuits, all vital ingredients in a creative environment.